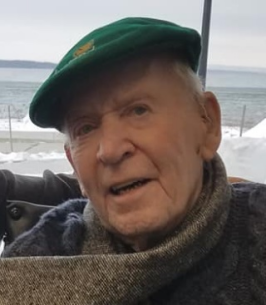 Family and friends may call from 4:00 p.m. to 7:00 p.m. on Friday, October 15th at the McGuigan & Bero Funeral Home, 45 High St., Geneva. Members of the Knights of Columbus will meet at the funeral home at 6:00 p.m. Funeral services will be held on Saturday, October 16th, with prayers at 9:30 a.m. at the funeral home and a Mass of Christian Burial at 10:00 a.m. at St. Stephen Roman Catholic Church. Burial will be in St. Mary’s Cemetery

John was born on February 2, 1931 in Brooklyn, NY, the son of the late Hugh and Anna (Maher) McQuillan. He served in the US Air Force during the Korean War and in 1951 he reported to Sampson AFB for basic training. At an USO dance in Geneva he met his beautiful bride. After the military, Marcy and John decided to make Geneva their home. John became a Pressman for Humphrey Press in Geneva, where he worked for many years. He later worked at the VA Medical Center in Canandaigua as a Motor Vehicle Operator. After retiring from the VA, he worked as a driver for Lakeview Health Services where he continued to be in the service of others and he always took a personal interest in those he helped.
He was a faithful member of St. Stephen and Our Lady of Peace Parish, an active member of the American Legion Post 396 and the Geneva Council #272, 3rd degree Knights of Columbus. John was involved in establishing the Irish-American Society of the Finger Lakes, which promoted Irish music, dance and culture in the area. In 2010 John was humbled to be named the American Legion’s “Irishman of the Year”.

John grew up at a special time in Brooklyn; playing stickball as shortstop for the “Ramrods”, camping out on his fire escape, jumping the fence to Dodger’s games and going to the theater for nickel movies. When it came to sports John was always willing to help out. He loved coaching baseball and softball in leagues of all levels. He was an avid NY Mets and NY Giants fan.

John and Marcy loved raising their children and others. They loved traveling to visit their grandchildren and enjoyed a, long-awaited, once in a lifetime trip to Ireland.

In lieu of flowers, please consider a contribution made to the Geneva Center of Concern or Finger Lakes Health (for Living Center North).

All rights reserved. This obituary is also archived at obittree.com